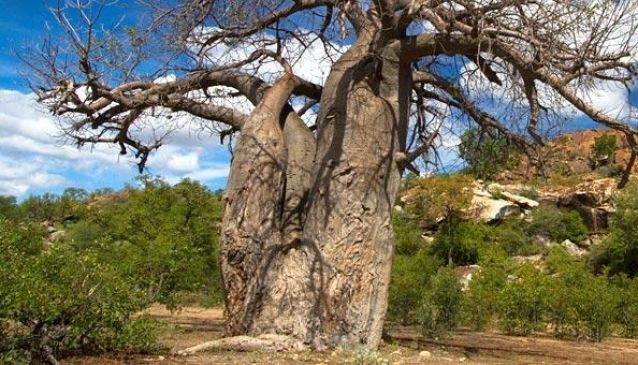 Mapungubwe is not only a fascinating National Park, but it is also a UNESCO World Heritage Site, with its archaeological treasures being of huge cultural importance. Mapungubwe is situated at the confluence of the Limpopo and Shashe Rivers, at the meeting point of the borders of South Africa, Botswana and Zimbabwe, and as a reserve it is rich in biodiversity with great scenic beauty.

The focal point of the Heritage Site is Mapungubwe Hill, where a very developed African civilisation prospered between 1200 and 1270 AD. The area was already inhabited by a growing Iron Age community from 900 AD and became rich through trade with places like Egypt, India and China. This Hill is the place where archeologists excavated the now famous golden rhino and other evidence of a wealthy African kingdom.

The Iron Age civilization of Mapungubwe was not limited by the Limpopo river. Animals have also always been able to wander around in the area of South Africa, Botswana and Zimbabwe. For this reason South Africa signed a memorandum of understanding with Botswana and Zimbabwe, which established what is now known as the Limpopo-Shashe Transfrontier Conservation Area (TFCA).

The wonderful scenic backdrop for a rich variety of animal life is formed by the Park's Sandstone formations, Mopane Tree woodlands, unique riverine forest, and the enormous baobab trees. Elephant, giraffe, white rhino, eland, gemsbok and numerous other antelope species occur naturally in the area. There are lions, leopards and hyenas in Mapungubwe, but you have to be very lucky to see these predators. There are approximately 400 species of birds, including kori bustard, tropical boubou and pels fishing owl, and so the Park is also a birders paradise.

There are also smaller game species to be seen in the Park, including badgers, civets, porcupine, caracal, and vervet monkeys. Pythons and Black mambas are common, and there is a diverse insect life.

There are several camps of different types in Mapungubwe:

Leokwe Camp: This is the main camp, situated amongst spectacular sandstone hills. The Treetop Hide, Confluence View Site, and the Picnic Area are close to Leokwe, making it a very convenient camp at which to stay. The camp itself has a swimming pool and sundeck, as well as a central braai area.

Limpopo Forest Tented Camp: This camp, because of its situation in Limpopo riverine forest is a excellent place for birding. The camp is close to the Maloutswa Pan hide.

Tshugulu Lodge: This luxury lodge sleeps 1 x 12 in the guest lodge with 6 x bedrooms, a bath, en-suite swimming pool and an exclusive eco-trail.

Vhembe Wilderness Camp: This Camp has been built on a small ridge within a valley, within walking distance of the Limpopo River and the Mapungubwe Hill Heritage Site.