Want to Run Your Own
My Guide Website?
Find Out More
MAKE ENQUIRY 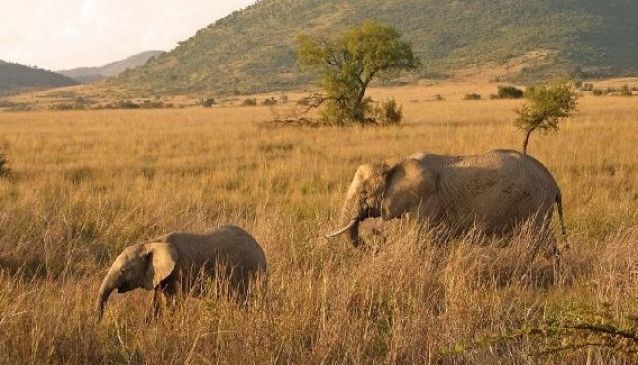 The Pilanesberg National Park is one of the region's most celebrated game reserves, and it's conveniently located just a short drive north of Johannesburg, right next to the popular Sun City resort. At 55,000 hectares it is the fourth largest reserve in South Africa, and a great advantage to its visitors, is that it is completely malaria free.

The Black Rhino Game Reserve deserves a special mention here, because it is a relatively unknown Reserve that lies completley within the Pilanesberg National Park, only 30 kilometres North West of Sun City. The Black Rhino Reserve itself is just less than 2 000 hectares in size and is the first extension to be incorporated into the Pilanesberg National Park. The final goal is to incorporate farms between Pilanesberg National Park and the Madikwe Game Reserve to form the huge "Heritage Park" that will be as big as 300 000 hectares. No day visitors are allowed into the Black Rhino Reserve, but Rangers from Lodges, such as the well known Buffalo Thorn Lodge, will take you for a trip in open game drive vehicles, for close-up viewing of Lion, Leopard, Elephant, Rhino and Buffalo.

There are three fascinating features that make the whole Pilanesberg Game Reserve area worth a visit:

The Reserve is situated in the crater of an extinct volcano which is approximately 1 300 million years old. But this volcano is not just an "ordinary" volcano; it has extremely rare rock types and structures, which make it a unique geological feature visited by geologists from all over the world. The volcano crater has 3 concentric rings of hills surrounding it, which add to its mysterious appeal.

It is uniquely situated in a climatic transition area – which places it between the dry Kalahari region on the North West and the wetter "Bushveld" area on the South East – in the Rustenburg direction. Associated with this, is a change in the vegetation across the Reserve, where one can see rolling grasslands, typical African bushveld, scattered woodlands and pockets of forested areas in the mountains.

3. Uncommon mix of animals and plants

Because of the presence of different mini-ecosystems throughout the Reserve, interesting associations of mammals, birds and plants, not often found elsewhere, are found here. One can find all of the Big Five roaming freely throughout the Pilanesberg, as well as a number of other exciting animals, including brown hyena, cheetah, sable, giraffe, zebra, hippo and crocodile, among many others. It's also a birders paradise, with over 300 species being recorded there.

There are a number of ways to enjoy the abundant wildlife in the park, whether you drive yourself along the 200 km of roads in the Reserve, or take a guided drive with a qualified game ranger. You can enjoy the bush outside of your car at various demarcated hides, picnic sites and viewpoints throughout the reserve. There are numerous accommodation options scattered throughout the park, each with their own charm. Some offer superior luxury and comfort, while others offer a more authentic, rustic experience, with self-catering facilities. Either way, there's a lodge or resort within the park to suit all needs, desires and budgets.

Outside the Reserve, there are a number of well-known Hotels situated between Rustenburg and The Pilanesberg. The world famous Sun City and Palace of the Lost City Resort is situated just outside the gates of the Reserve, making the whole Pilanesberg a holiday paradise.