What are you looking for?

Tell us what you're looking for...

GAUTRAIN
The Gautrain, which was launched shortly before the 2010 World Cup, is one of the world's most advanced high-speed trains. This world-class train system currently connects OR Tambo International Airport to the heart of the Sandton Central Business District, making it the obvious choice for both leisure and business travellers staying in the city's northern suburbs. There are new routes and stations currently under construction, and soon the Gautrain will link up most major centres within Johannesburg and Gauteng.
The train departs from the directly inside OR Tambo International Airport, and arrives beneath the bustling CBD of Sandton approximately 15 minutes later. This route currently costs R100 one-way, and tickets can be bought from each station serviced by the train.
During peak periods (05h30 to 08h30 and 16h00 to 19h00), the trains run every 12 minutes, and off-peak (08h30 to 16h00 and 19h00 to 20h30) every 20 minutes. On weekends and public holidays, trains run every 30 minutes.
There is also a Gautrain bus service that travels between various points throughout Johannesburg and the Sandton station. For more information on the bus service and the Gautrain in general, visit the Gautrain website.
METRO RAIL
Johannesburg's metro railway system connects central Johannesburg to Soweto, Pretoria, and most of the satellite towns along the Witwatersrand. The railways transport huge numbers of workers every day. However, the railway infrastructure was built in Johannesburg's infancy and covers only the older areas in the city's south. The northern areas, including the business districts of Sandton, Midrand, Randburg, and Rosebank, currently lack rail infrastructure. 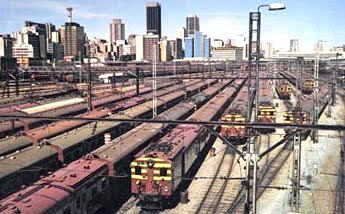