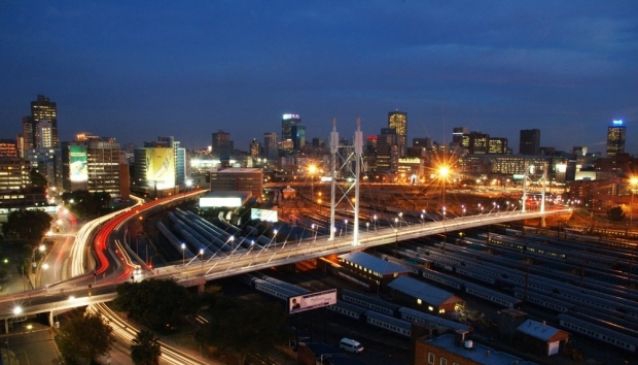 Spanning 284 metres, the Nelson Mandela bridge is an impressive sight in the midst of Johannesburg city centre. Recently constructed in 2003, it already holds a name for itself as giving the city a new lease of life. Built to link the Newtown shopping precinct and the Braamfontein business area, the bridge covers 42 railway lines heading in and out of the CBD.

Designed by architectural firm Dissing and Weitling, it is the largest cable-stayed bridge in South Africa and was designed to be as light as possible while still structurally stable. Over 4,000 cubic metres of concrete and 1,000 tonnes of structural steel were used in its construction which has since become one of the city's most popular landmarks.

The bridge was named in honour of South Africa's first ever democratically elected president and the structure is symbolic of his role in bridging the gap between apartheid.

The structure offers great views of the city and you can either drive over it, or for a slower view, walk along one of the pedestrian lanes. At night, it lights up with a multitude of colours to give an even more impressive view.